I am ready to represent you.

I am candidate running for Oulu University Collegium. I have years of expertise of different academic positions of trust in the University of Oulu. Lately I have been member of Education Council and “development of the digital pedagogy and quality of the Learning Environments” steering group.

University of Oulu has been located in Linnanmaa 50 decaces and has a lot internal and external synergies. Premises enables encounters and collaboratin in a way which is not possible in many campuses in Finland and abroad.

Research units, Study programs and faculties (despite of bio- and medical faculties) which are located in the same campus create possibilities for multidicplinary collaboration in the teaching, learning and research.

Are we now going towards the situation where research, teaching and learning are going to separated from each other? Ideas of Raksila Campus have been worrying from the perspective of scientific and academic work. Universal academic ideal is that research and teaching are inseparable. It’s not possilble decouple those from each other without destroying something very crucial and important from the academic work.

I have expressed my views about the university

I have written numerous public opinions and speeches about the university of Oulu. Public opinions have been published mainly by major local Newspaper Kaleva.

Unfortunately texts are in Finnish, but you can use Google translate plugin in my site to translate texts into your language.

You can found my opinions and speeches from here: https://www.jarilaru.fi/jari-larun-puheita-ja-kirjoituksia/

I have multidisciplinary orientation as a researcher and teacher

I have had always multidisciplinary orientation. I started my master’s studies in Faculty of Education 1997 and Information processing science studies in the Faculty of Science 1999. I have always been interested in using technology to support communication and collaboration. It has been visible in my courses as a university lecturer and in my publications as a researcher.

I have been member of several facility renovation programs, examples are Lecture hall L2, human science research infrastructure LeaForum 1.0 and 2.0 and new spaces for Faculty of Education. All those spaces have emerged as a very useful assets for modern research designs or as state-of-the-art teaching facilities. I have been also pushing University to adopt cloud based environments, such as O365 and Google Workspace and been promoting total re-design of the AV-infrastructure in teaching and learning spaces.

I did my doctoral studies in the national multidisclipnary doctoral school on learning environments. I did defend my thesis in year 2012 with the topic “Scaffolding learning activities with collaborative scripts and mobile devices“.

I have been member of the Learning and Educational Technology Research Unit (LET) since early years of 2000s and been member of different faculty and university level positions of trust.

Do you think, that visions of the future of university are consult driven?

Consults and other external expers have their own important role in the development of the organizations, but do they have taken too strong role in the visions of the university? Do we trust to our scientific community and open academic discussions while thinking about the future of the university?

University of the future?

Our administration has sketched visions about the future of the campus

Engagement of academic community has been weak, although we have various expertise from the different fields. Simplistic questionnaires and facilitated discussions doesn’t fulfill requirements of academic discussion.

We scientist create future on daily basis, are we doing science or teaching.

Our university has decided to start to go adventurous journely without engaging it’s most important assest – staff. It’s worrying direction.

Future visions should be based on the engaged scientific community and methods, which are reliable and valid in the context of academic experts. Sketchy questionnaires does not fullfill that requirement

Staff opinions should be heard more often and university should move focus to requirements of the quality research and education from the futuristic, but sketchy, campus plans. 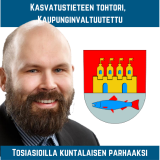